Can Gold Regain Its Shine?

Gold has been in a persistent decline since late 2011, which is when investors last really felt a tinge of panic, brought on by the U.S. credit rating downgrade and the thought that maybe, just maybe, the U.S. Treasury would default.

Fast forward four years, billions in Federal Reserve bond-buying stimulus and steady climbs in the stock market and the U.S. dollar, and the yellow metal has fallen far out of favor with investors. After dropping below $1,200 an ounce in 2013, it traded in a meandering sideways channel until breaking down to a low of $1,072 last month on expectations the Fed will start its first rate hike campaign since 2004 as soon as September.

But on Monday, the Gold Trust SPDR (GLD) broke above its 20-day moving average for the first time since June and looks ready to exit a five-week basing pattern. Gold and silver stocks are on the move as well, with the Market Vectors Gold Miners (GDX) rising 4.7 percent in its best one-day gain since the beginning of April. 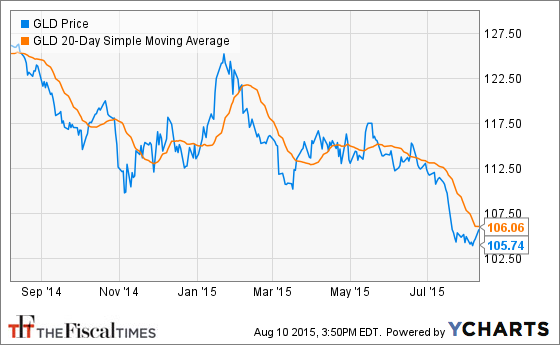 Most importantly, the dollar is on the slide on a slight cooling of September rate liftoff expectations. Some have fingered comments this morning from Atlanta Fed President Dennis Lockhart, which were largely boilerplate (liftoff timing is flexible and data dependant, Fed will be gradual in its rate hike pace).

But another explanation was the twisted logic of Goldman Sachs economists explaining why they don't believe the Fed will take action on rates until December. This was based on ongoing tepid wage inflation as well as some reading-of-the-tea-leaves in relation to comments made by Fed Chair Janet Yellen back on July 10.

In her comments, Yellen said "unanticipated developments could delay or accelerate" the first rate hike. According to Goldman, this means her baseline expectation is for the first hike to come at the end of the year since "it was not really possible as of July 10 to 'accelerate' a September baseline unless she meant to put a July hike on the table (not likely)."

Painful explanation notwithstanding, investors fearful of the end of zero interest rate policy cheered the analysis and responded: Dollar down, stocks up, gold up and oil up.

Another reason gold has bounced off its lows is that sentiment seems to have reached a crescendo. Hedge funds are short on gold more than ever while commercial hedgers — considered the smart money traders — are the least hedged against weaker prices in 14 years. In other words, while speculators are betting on a continued drop in gold producers, other professionals believe the shiny stuff is at its most attractive price point since 2001.

Related: How Hedge Funds Are Profiting from Puerto Rico’s Pain​​

There are analyst actions underway as well, with Randgold Resources (GOLD) upgraded to a “buy” at Numis. The People's Bank of China is a buyer too, increasing its gold holdings by 1.5 percent in July, with promises of regular monthly updates of its gold holdings going forward. And the supply/demand fundamentals are improving as well.

Bank of America Merrill Lynch analysts see a host of scenarios that could ultimately push gold higher in the medium term, though they warn that the Fed could still surprise everyone by hiking in September and turning hawkish. These bullish developments for gold include a slowdown of net selling by investors, steady demand from China and India and an acknowledgement by the Fed of disinflationary pressures such as the recent renewed weakness in energy prices.

In response, I have recommended a batch of gold mining stocks to my Edge subscribers, including Barrick Gold (ABX) and Kinross Gold (KGC) which are up 12 percent and 17 percent, respectively, since added last week.